My 13 year old son Ty is going to be in his first exhibit at Columbia College Book & Paper arts gallery in Chicago this month. He is passionate about origami, he has been doing it since he was 4 years old. At that time I taught him to fold a crane and a water bomb, the rest he has learned on his own. It is amazing what kids can learn when you provide them with the tools and opportunity. 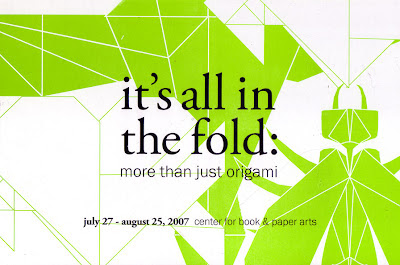 Here is the press release:

Chicago, IL – Can you imagine a traditional origami crane folded by a 13-year old to the size of a flea in perfect form? Or a mathematician turned origami folder who is regularly hired by the medical industry to fold something so small that it can fit into a shunt and expand in a human vein? It’s All In the Fold is an exhibition that takes a world look at the way paper transforms itself when folded. More than an amusement, origami today also teaches mathematics and geometry. It's more than just cranes and snowflakes. Try tessellations or tetrahedrons, dodecahedrons and other polygons. Origamic furniture, folded paper lamps, airplanes and a few naughty folds are all on the horizon.
Chicago and international paper folding artists and teachers will amaze you with the dexterity of their folds. It’s All in the Fold has attracted some of the world’s most celebrated folders.

Email ThisBlogThis!Share to TwitterShare to FacebookShare to Pinterest
Labels: my kids art