As the summer warms up, I have set aside my cable sweater project and pulled out some lace weight yarn to knit. I have 3 skeins of Knitpicks Shadow in Jewels that has been sitting in one of my yarn baskets. Things have been pretty stressful and I decided I needed something that would be very relaxing and simple to knit. So I consulted one of my favorite reference books; A Second Treasury of Knitting Patterns. 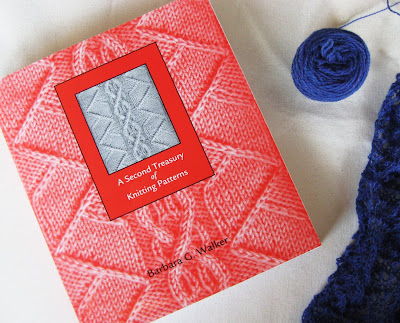 I came across Ostrich Plumes, a variation on feather and fan, which is a very easy lace pattern, and thought that would be just the right amount of interesting design and easy to memorize pattern. 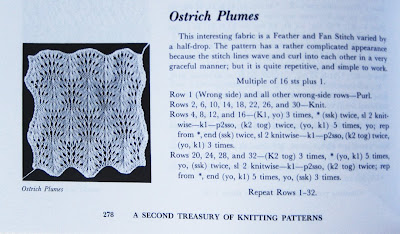 Being a visual person, I prefer working from charts than reading patterns, so I made a chart from the written directions on this chart generator. Seeing the pattern graphically helps me remember the pattern so much better.

Before starting my shawl, I knit and blocked three samples to see what size needles I wanted to use for my lace pattern. These three samples in reality are different sizes, the blue one being the smallest ( 6" x 7"), it was knit on size 5 needles and makes a nice solid pattern. The second sample was knit from the same yarn (but in a different color) with two strands of yarn on size 8 needles. It finished just a little taller and about an inch wider than the first swatch, it was heavier weight and had lost the nice drape that my first sample had. The last sample was knit single strand on size 8 needles, after blocking it was 7" x 9", it has nice drape but the design felt a little too open, loosing some of the pattern definition. 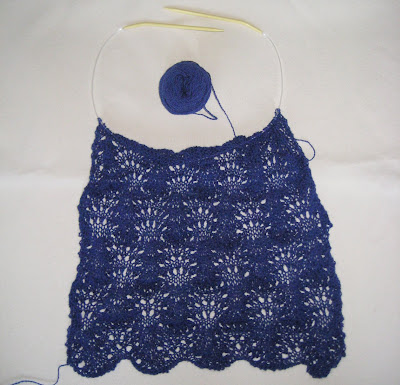 I settled on size 7 needles with 2 and a half repeats of the pattern from the book. I figure I will just keep knitting until I run out of yarn or until it reaches 60 or 70 inches.
Posted by Unknown at 11:00 AM