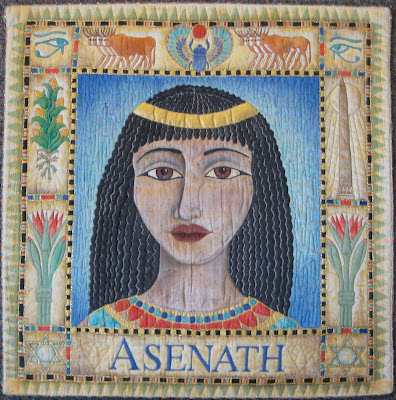 It has been a long time since I have seen this old girl. This is the quilt I made for the traveling exhibit Women of Biblical Proportion. It was made in 2003 and just arrived home yesterday. This exhibit traveled to 40 venues in 25 states over the last four years. Together with The Men of Biblical Proportion $16,000 was raised and donated to Multiple Sclerosis. It was wonderful being able to participate in such a worthwhile exhibit. Kudos to Ruth Harris and Chantelle Cory for curating this!

I chose Asenath because it is my sisters middle name. For years I never knew the meaning of her name, we always just thought of it as another one of those weird old names from the genealogy in our family bible and wondered why on earth our dad insisted on giving her such a bizarre name. I have since learned Asenath (meaning gift of Isis) was Josephs wife, as in “Josephs Technicolor Dreamcoat”. She was the daughter of an Egyptian priest and was given to Joseph by the Pharaoh. After falling in love with Joseph she converted to his Hebrew faith. Knowing the story behind the name has given me a whole new perspective, now I think it is a pretty cool name.
Posted by Unknown at 2:11 PM